Never On These Shores

1942: The Nazis have successfully landed in Mexico and have invaded the United States through Texas. The Japanese have conquered western Canada and have captured and occupied most of the West Coast from Seattle to the outskirts of Los Angeles. The Italians have launched a massive amphibious assault from Cuba and have taken control of Florida and the Southeast as far north as Atlanta. New York City and Washington D.C. are fortifying and preparing for the onslaught. American forces are stranded in Europe and Southeast Asia. the homeland is being defended neighborhood to neighborhood by women, the elderly, and gay men, all ineligible for military service. The KKK and Right Wing radicals are supporting the invaders hoping to establish concentration camps where blacks and Jews are being transported all over the western U.S. Amid the carnage and brutality of an enemy seeking to destroy everything in its path, the American Spirit is put to its greatest test. Pastore weaves a tale that will not soon be forgotten as this highly imaginative story unfolds. It is an awe-inspiring parable of the true nature of the American people when put to their greatest test.

Except for the end where it gets a little too proud for its britches, it is a fairly good assessment of the plot. As far as alternate histories, alternate realities go, exploring the "what if's" of the Nazi's winning the war is a highly popular subject for "imaginative" speculation. There are several Star Trek (Original Series) episodes, for example, that feature Nazis or Nazi-thinking. There are several Twilight Zone episodes as well. (And that's just what I've seen. I can only imagine that they're is much more out there in film and in print that I'm not familiar with.) There must be something inexplicably fascinating or captivating about going there, about allowing yourself to go that dark and scary place and envisioning how events would unfold if the Nazis (Nazi thought, Nazi culture, or flesh-and-blood actual Nazis) controlled the world. Maybe it's because they just make the ultimate bad guys? Who knows? But this book relishes the idea of being your worst nightmare. 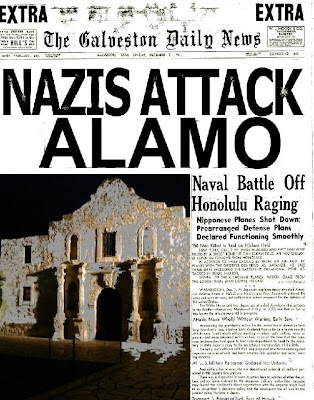 Told through multiple points of view, Never on These Shores is the most violent, most hate-filled, most vile imagining possible. The language. The violence. The murder. The rapes. It's meant to 'shock-and-awe' you I imagine. When I was *warned* to expect dirty language, I shrugged it off. I've seen plenty of movies, read quite a few books, how much more "shocking" can something get? Well, there is the language of an "R" film, and then 500 miles past that is this book. Is it as it should be? Maybe. Maybe not. As I mentioned earlier, if the Nazis had invaded, if war was invading our neighborhoods, our backyards, if our lives were being threatened by three enemy armies...keeping our language clean and pristine WOULD not be on the agenda. If ever there would be a time to let loose, then that might be the time. Still, it makes for an uncomfortable read.

Everything about this book is designed to make you uncomfortable and ill-at-ease. The fact that invading armies are slaughtering people. The fact that Americans--both civilians and politicians--are joining up with the Nazis, supporting them fully, working against the American resistance. The fact that the murderous agenda is being carried out--the rounding up of blacks to be gassed and burned. (Of course they're not called black.) This book is just a million and one disturbing images.

What can I really say about this one? It's not for everyone. I can see that some people might like it. Might enjoy it. (If enjoy is the right word.) But it's not for those that are easily disturbed. Reading it can turn your stomach. Is it realistic? I'm not sure. I don't think it is. Not really. Maybe in some areas, but not others. I have a hard time accepting it from the military point of view. I don't know how even working together these three armies have enough men, enough soliders, enough troops to hold their positions in Europe and Asia (and wherever) and conquer North America as well. I don't know how they could spread their armies out so thin to hold positions in so many places. And if they were using their newly-conquered enemies as soldiers, I'd imagine that sooner or later that would backfire on them. And I certainly don't buy that the entire nation was soldier-free in the spring of 1942. I'm not an expert. Obviously. But I've done *some* reading, and it just seems unlikely. War takes training, it takes recruitment, it takes time.

But one idea that this book stirs up is racism and prejudice and propaganda. Modern readers can look back at this time and see how "wrong" we were to hate the Germans, hate the Italians, hate the Japanese. How "wrong" we were to fear an invasion. How "wrong" we were to tell people to keep an eye out, to keep a watch out for suspicious behavior. How "wrong" we were to mistrust German, Italian, and Japanese citizens. How "wrong" we were to doubt anyone's loyalty based on descent. How "wrong" we were to create propaganda--ads, cartoons, etc.--during the war. But in this book, we see that the propaganda was right. We did have something to fear. We did have ample reason to mistrust. Not that there is much they could do about being "right." But still. But the part that is really unsettling, the part that throws doubt on everything is the fact that the book shows 'normal' and 'average' American citizens (some politicians, but most just regular folks) joining in the Nazi cause. In most cases, not out of fear, not out of wanting to come out on the winning side, but because of genuine support for the Nazi's white supremacist philosophy. It's the out-in-the-open (as well as the behind-closed-door variety) of racism, of hate, of prejudice that turns my stomach so. The thought that maybe just maybe racism is so dangerous, so deadly that something like this could have happened then. And the fear, the realization, that racist thought might not be as dead as we'd like to believe. Racism should be scary, should be crazy to modern readers. It should carry some shock-and-awe kind of punches.

© Becky Laney of Becky's Book Reviews
Posted by Becky at 10:24 AM

Wow Becky, what a fabulous review! You know the whole premise behind this book really has me intrigued. It sounds like a story that I would enjoy, but even though I'm generally okay with bad language and violence and such when it adds to the plot of a story, this sounds like it might be a little too unsettling for me. I don't know. I'm definitely going to write it down and think about it though.