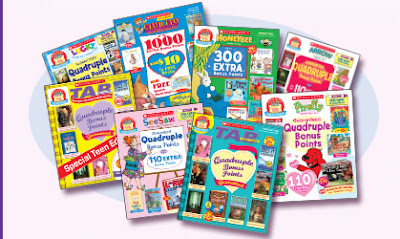 Growing up, one of the things I looked forward to in school--the highlight of the month as far as I was concerned--was receiving the Scholastic Book Club flier. Pages and pages (6-8 pages) of books to oodle. Taking the flyer with pen in hand, I could look for at least an hour. Marking which books I most wanted. I always marked more than I could ever have afforded. But that was part of the fun. Books ranging in price from 99 cents (or was it 95 cents???) on up. There were always plenty of options under $5. True, you could find the Narnia boxed set or the Little House boxed set at least once a year that would have been a bit pricier. But still. Tons of paperback books for under $5. And a handful of hardback books for under $10 or $12. My parents didn't let me order books every month. (My allowance was about $2.50 a week. And I had plenty of other wants like Barbie dolls and stuffed animals.) But when I could, I would. It was a hugely satisfying experience. From the day the catalog arrived and the fliers were sent home, to the day the checks were due back at school, to the day the box of books arrived and the books handed out to kids.

As an adult, my ties weren't completely severed with the glory of the Scholastic book club. My sister is a first grade teacher. But even when she was a teacher-in-training, a college student, a student intern, whatever, she was on the mailing list. So to this day I have a slight "in" with the club. (Although for the record, I haven't ordered books recently.) But I did look at the November and December catalogs. It was fun to see such GREAT books available for such GREAT prices. True, there is always junk amongst the treasure. The Barbie and Barney among the true greats like Mo Willems. But still. True, if I were queen of the universe I'd have less emphasis on movie tie-ins and toys, but even with its flaws, I mostly have nothing but good to say about the concept.

Who could find fault with something that puts books into the hands of kids at affordable prices? Who could find fault with something that offers so much potential. The points the teacher earns, the class earns, goes toward free books for the classroom. So even if individual kids can't spend a couple of bucks of their own money to buy books. They still benefit from the growth of the classroom library.

Well, the Vancouver Public School District apparently has found fault--so called "legal fault" with the system. The parents and teachers ARE UNHAPPY for the most part about the decision.

Teacher-librarian McKinley said that rookie teachers build their classroom libraries with points earned from Scholastic sales in their classrooms. Those points turn into free books.

That may be, but Vancouver school district officials doesn’t want to burden students with take-home fliers from businesses.

“If we allow Scholastic Book Clubs, there’s no reason we couldn’t allow any other commercial endeavor,” Murdock, the legal counsel, said.

I think in this situation NO ONE wins. Parents and students are denied access to affordable, mostly-quality literature. Teachers are indirectly denied free books and great classroom resources. Kids don't have equal access to great books. They don't. The Scholastic Book Clubs are a good blend of new and old. Old favorites that have stood the test of time. But at the same time offering new literature--recent favorites and award winners. It highlighted new authors and established authors.

Now I won't deny that Scholastic likes to make money. It is a business. But really selling books is a win-win situation. Everyone benefits. The benefits of kids reading books--either at home or at school--far outweighs the commercial aspects.

What a shame. I still have books I bought from those Scholastic Club flyers years and years ago. I'd hope my daughter will have the same opportunity (she probably won't go to school in Vancouver).

That's outrageous! Simply outrageous! If they took that away from my kids' school I would most assuredly raise a royal stink! Unbelievable!

I agree! How sad is that! I loved scholastic!!! One time my mom did get me all of the books I'd been wanting, and it was a Christmas present. I will never forget getting that big box of books to bring home! Oh what temptation to sneak a peek! Oh how hard it was to wait until Christmas to read all my new books. Some of which are probably still on my shelf.

I loved Scholastic (and Troll) bookorders, too, when I was a kid. And I still get a small thrill when my kids come home with them. However, I don't know if it's just my adult perspective or if they've really changed this much, but I've noticed that you really have to weed through the garbage to find the treasures lately. I can deal with it when there *are* good deals in the brochure, but I have to say I was royally po'd one day when my son came home with a Scholastic order form and when I looked through it, all it was was software and video games. Seriously - this particular form wasn't a book order form at all. I refused to buy anything and felt manipulated. I don't think Scholastic should be taken out of schools, but I do think there should be a limit to what they are allowed to push on the kids/parents.

It is a sad day. I loved book orders when I was a kid and I love helping my kids pick books. It's a sad thing for authors too. Book orders are a great way for kids to meet the old classic authors, but it's also a way for new authors to meet kids.

Will they still do the semi-annual book sales? they raise a lot of money for classes and libraries.

Somer essentially said what I wanted to, but I'll add: I would be more sad if what Scholastic pushed in those books had more value. Character books, movie-tie-ins... it's mostly what I consider to be crap. I'm firmly of the belief that it's not just having a child read, but it's having a child read GOOD books. And Scholastic just isn't selling good books in those fliers. Not anymore.

I agree that there is a good percentage of crap. It really depends month by month what that percentage is. Some months it might be 80% crap, and 20% quality, but there are times when it's more evenly spread. I have seen months where many many good books were offered. So I can't just write it off completely and say that good books aren't being offered anymore.

Granted if I were in charge, there would be higher standards of quality. But I think the good stuff is there, you just have to be patient and dig for it.

What is so sad to me about the district's decision is that now there is one less source of books in the students' lives. Although unintentional, I'm sure, the district is contributing to the decline of reading for pleasure by omitting this opportunity from the landscape. While teachers are working hard to get kids excited about reading, some of the fun, inexpensive choices were just eliminated.

Some of the only books I read as a kid were from those Scholastic fliers. It is a shame that a school would remove a chance for kids to find the pleasure of reading. It is one of the main reasons why I homeschool.