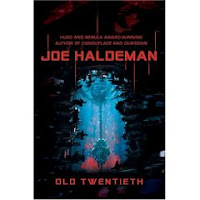 This is my second Haldeman novel. My first was The Accidental Time Machine. I loved The Accidental Time Machine. Loved it. My expectations were high, and I was not disappointed. Depending on your expectations, you may love or hate Old Twentieth. Like so many great science fiction stories (dystopian ones especially), it is not so concerned with having that happily-ever-after ending. [The Amazon reviews seemed to be mixed. Some "getting" it, some not. But such is the case I suppose.]

I haven't read much science fiction excluding Orson Scott Card and H.G. Wells. (Unless you count the Star Wars novels. I've read about six or seven of those. I've also read some Isaac Asimov. But his body of work is so extensive, that my few books seem to be a minuscule representation.) My love for the genre stems more from loving Star Trek TNG, Stargate SG-1, and The Twilight Zone. So I don't have that much to compare it with--the plot, the characters, the setting. But in my opinion, Old Twentieth was great. Great in a completely different way than The Accidental Time Machine.

There have been many many books--science fiction books--about the collapse of humanity and society. Books where technological advancements lead men into making foolish choices, lead men into taking the wrong path. (You can also replace the word books with movies and tv shows.) Old Twentieth is just one of many I suppose. Another familiar theme? Humans finding a way to defeat death. Finding a way to become immortal. Finding a way to live forever. Again, such is the case with Old Twentieth. This immortality comes via a drug called BCP. But this drug was expensive. It led to a war between the haves and the have nots. This war was dirty, vicious, ugly. "Lot 92 was a biological agent that killed 7 billion people in a month leaving the world safe for 200 million immortals." But the war had unexpected consequences--the downfall of society. If all of the workers, all the working class, all the ones with little money and little respect and little appreciation--were wiped out it leaves the lazy upper class that are lacking in skills to do the menial tasks that society needs to survive. Usher in more death, more violence, more despair.

Fortunately, Old Twentieth doesn't focus on that past. No, these are distant memories now. The narrative follows the lives of those individuals who have chosen to leave Earth in search of another home, a home on a newly discovered planet that seemingly appears to be compatible for hosting human life. It will take a thousand years and five space ships for these brave (some would say crazy) individuals to arrive. Perhaps longer to set up a colony. (Yes, there are plenty of science fiction novels about humans establishing colonies on other planets.) But first they have to get there. Something that seemed so simple--immortal humans traveling for a thousand years--became a bit more complex along the way.

What do humans do to pass the time? What could you possibly do in relatively cramped quarters for that many years? Sure you could probably entertain yourself a year or two by reading, painting, dancing, playing the guitar, etc. But a thousand years? The ships' entertainment comes from a virtual reality machine nicknamed "The Time Machine." The machine takes humans--five at a time--to various destinations. Each year of the twentieth century, for example, is a separate destination. Humans can experience twenty hours at a time what life was like--using all five senses--in the past. The twentieth century is the playground, the virtual playground, of these passengers.

Our main hero, our narrator, is Jacob Brewer. The time machine is his job--maintaining and overseeing its functionality its use. He has many assistants that help him out as well. A group of five or six individuals who are "experts" in playing this virtual reality game and fixing any technological hiccups when they occur. And they do begin to occur more frequently throughout the novel.

I'm not going to say too much more. If I do, it might color your expectations one way or the other. I certainly approached it like it would be an episode of Star Trek where the holodeck would malfunction. And on the surface, it's a fair comparison. But it is so much more than that. It borders closer to the Twilight Zone and The Matrix. I picked up the Twilight Zone vibes fairly early. And since I love The Twilight Zone, it was a pleasurable experience. I didn't pick up the Matrix vibes until after I finished it. (Then again, I've only watched that trilogy once. And it's not something I think about often. I honestly can't remember what happens in the third movie at the end.)

This is a novel that is in a way deliciously creepy and freaky. It's world is one that is nice to visit for the duration of the book, but that you'd never want to live in yourself!

First sentence of prologue: The smell of death is always with you, like a rotten oily stain in the back of your mouth. Rum won't burn it out and a cheap cigar won't cover it. An unwelcome condiment with every mouthful of rations.

First sentence of chapter one: My family has a tradition, going back to the nineteenth century, that whenever a child was born (only a male child, originally), the father would buy a case of promising wine of that year's vintage.

Joe Haldeman's official site. (His bibliography--which is looking like it might just as well be titled Becky's TBR pile--can be found here.)

****Avoid reading if you're even remotely interested in reading the novel*******

Here are some SG-1 episodes that it vaguely reminds me of:

[Tin Man, The Gamekeeper, Forever In A Day, The Changeling, Avatar]
Posted by Becky at 5:04 PM

Oh....this sounds really good!! I haven't heard of Haldeman before, but I will definitely be adding him to my TBR!! Thanks for a great review!

If you haven't read The Forever War, you really should. It's the definitive Haldeman book, IMHO.