In the time before we knew that we would be driven away, our lives uprooted, and our people scattered, Grandfather Jim Williams spent every spare minute tending his beautiful garden in Freedomtown. He loved that garden, and I loved him. The garden was my favorite place.

Set in the fictional town of Dillon, Texas, White Lilacs tells the story of a community within a community. Freedomtown, a community of African Americans (Though of course they weren't called that then, negroes or colored being the terminology then. Though Meyer does use the n* word later on when relations become more strained.) Our narrator is Rose Lee Jefferson, a twelve year old who is about to forced into growing up rather quickly. She is a girl that loves life, loves her family, loves to draw. She especially loves spending time with her grandfather. He is a gardener for the Bell family. Her Aunt Tillie works for the Bell family as well. (I believe as the cook.) One day, soon after our narrative opens, Rose is unexpectedly called into the Bell's kitchen by her aunt and told that she needs her to serve luncheon to the Bells and their guests. She had been having fun with her grandfather, and the garden was a place she felt at home, felt comfortable. But she does what she must. It's a day that will change her life forever. Why? She overhears that the white folks of the community are planning to force them out, force them to sell. They want a park, a library, a woman's club.

Throughout that summer, Rose works when she can and overhears as much as she dares. But by the middle of July, it's clear that the whites will have their way. Change is a coming. And coming fast. Knowing that it would be impossible to save their community, Rose acts quickly to preserve what she can--on paper. She draws what she can--the school, the churches, the homes, the businesses. 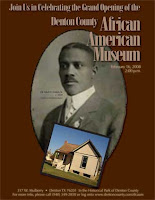 White Lilacs is a heartbreaking story of prejudice and hate. But it is also a story of a loving family, a family that holds onto hope, holds onto the good, that holds together.

Though fictional in nature, the book tells the all-too-real story of Quakertown. In the early 1920s, the African Americans of Quakertown were forced to sell their land so that the white folks of the city could have a park. You can read more about the actual Quakertown here. There is now a museum opened that tells the story of the community and documents its past.
Posted by Becky at 10:04 AM

Hey Becky,
I really liked this book review, it helped me a lot. However, could you please add the page numbers.
Thanks.

When it says Dillon, Texas it actually means Denton, Texas!

My 7th grade teacher said that she got pictures from there! I love this book it's so good. It suprised me that it was Denton, I used to live there!
I posted the 2nd coment.
Peace around the world for genirations!

I had to read this book for a school assignment and I found that it was one of the most boring books I have ever read.

one of my friends lives in the "Bells" house, i love that place, and i really like the park that they made, but after reading this book a saw my town fliped, when i read this i thoght, oh my that sonds like a hored town to live in, after i finished it i read the back, turns out i was born and raised in that town....but i still love it!

The most boring book ever! Would rather read a more serious book.

I was interesting in your links but when I click on them, they are no longer there.

Angela. Sorry about that! See if this new link will work for you!.