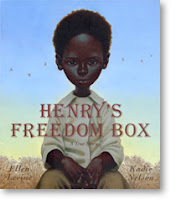 I loved this book from the very first moment I read it. I read it back in the summer. But it left me at a loss for words. How could I ever write down in a review just how good this book is? How could I capture how amazing the art is? How truly, truly amazing it is? I looked at it and thought--this will be getting Caldecott love. (And in fact it did get a Caldecott honor.) But it isn't just the art that's good. The text--simple at times--is just right.

"Henry Brown wasn't sure how old he was. Henry was a slave. And slaves weren't allowed to know their birthdays." I imagine this beginning would be quite effective in capturing kids' attention. The idea that a kid would not--could not know their birthday--not know how old they are??? It could prove intriguing. I think--and this can be tossed right out the window since I don't have a degree in education and am basing this simply on my conversations with my sister who does teach first graders--they don't get slavery; they don't get racism; they don't get prejudice; they don't understand how things used to be; how things were. The concept of a human being owning another is foreign to them. So the use of this book--the use of any book dealing with slavery, civil rights, or race relations--needs to be balanced with plenty of discussion and guidance on the part of the teachers. Books--especially historical fiction and nonfiction--need to be placed into context for kids.

The story is powerful, emotional. It seems unreal that it could be real, could be true. But it is. This is one story. But there were many stories. Most untold. Slaves who made their way to freedom. Slaves that never made it. Slaves that were waiting, hoping, praying for deliverance. Broken homes. Broken hearts. Broken lives. Broken spirits. The cruelty of slavery seems so apparent, so obvious at least in my reckoning. Henry's Freedom Box takes a story that is both heartbreaking and inspiring. In one sense, it captures the story of a man who made it. In another, it shows all those that didn't. He was just one. One of many. They all needed to be free. Even Henry's happy ending can't erase the pain and the sorrow of his past. 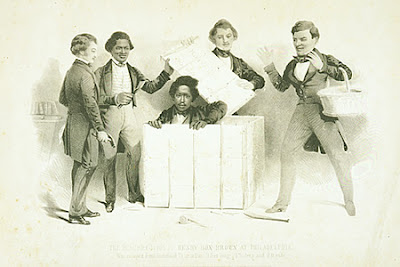 For adult readers, you can read the Narrative of the Life of Henry Box Brown Written by Himself. It is part of the "Documenting the American South" web project. The book was published in 1851.

Here is a song Henry Box Brown wrote to a familiar tune/song of the time "Uncle Ned."

Here you see a man by the name of Henry Brown,
Ran away from the South to the North;
Which he would not have done but they stole all his rights,
But they'll never do the like again.

Chorus--Brown laid down the shovel and the hoe,
Down in the box he did go;
No more Slave work for Henry Box Brown,
In the box by Express he did go.

When they packed the baggage on, they turned him on his head,
There poor Brown liked to have died;
There were passengers on board who wished to sit down,
And they turned the box down on its side.
CHORUS

When they got to the cars they threw the box off,
And down upon his head he did fall,
Then he heard his neck crack, and he thought it was broke,
But they never threw him off any more.
CHORUS.

When they got to Philadelphia they said he was in port,
And Brown then began to feel glad,
He was taken on the waggon to his final destination,
And left, "this side up with care."
CHORUS.

The friends gathered round and asked if all was right,
As down on the box they did rap,
Brown answered them, saying; "yes all is right!"
He was then set free from his pain.
CHORUS.

Roundup is at Karen Edmisten
Posted by Becky at 10:39 AM

My mother's got a first or second edition of Narrative of the Life of Henry Box Brown!

It looks great -- thank you!