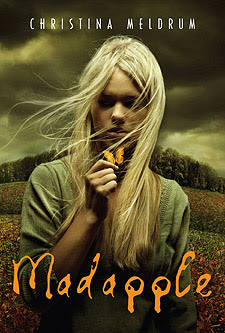 Weird and sometimes wonderful is how I'd describe Madapple by Christina Meldrum. It's not a novel for everyone. It's a bit dark, a bit moody, at times overwhelming, and not a bit traditional. It's a complex plot in a way. Well written. Well imagined. But very weird. Of course, there are plenty of folks that would read that description and think "this is the book for me!"

Set in the modern world--in America to be exact--the book has a very strange otherworldly feel to it. In part because our heroine, Aslaug, has been raised in isolation. Her mother, Maren, is a hard woman to know, to understand, to love. The two have been living in the country, living off the land for the most part. Aslaug has never attended school or church. She's never interacted or associated with anyone really. Though the two did occasionally venture into the nearest town to collect their mail and buy a few supplies now and then. But she's never known about the real world. She's lived a very sheltered, very odd existence. The information that her mother thought was most important to pass down to her daughter--and the information that her mother chose to conceal--is what sets Aslaug apart from her peers. What Aslaug knows is the natural world--the world of herbs and plants and weeds (roots, barks, etc.) She knows what plants are poisonous, and which ones aren't. And it is this knowledge of the natural world (in some ways associated with witches and witchcraft) that get her into trouble as the reader learns.

Maren, Aslaug's mother, dies of cancer. Though the powers-that-be suspect foul play for a bit and place Aslaug under arrest. (True, it was a bit strange that this teenage girl would try to bury her mother in the back yard after discovering her body instead of calling the authorities and arranging for a proper burial. But this "mistake" makes sense in connection with Aslaug's upbringing. What does she know of the authorities? Of the police? Of what's proper and improper?)

After Maren's death, Aslaug goes to stay with her mother's sister--her aunt Sara--and her cousins, Sanne and Rune. One might for half a second think this would be an improvement for her. That she would learn what it was like to be normal, to be loved....but no....this family she now finds herself in is just plain weird. Weird and a bit delusional. A bit out-of-place. Completely alien-outsider-culture going on in the midst of a modern day setting. What makes them so weird? They're cult-like, ultra-weird, non-traditional, spiritual-religious environment where everything's turned inside out and upside down and given a good shake or two.

Did I like it? Yes and no. I can see that it's well done. But it's a bit too weird for my personal taste. Don't get me wrong. I'm glad I read it. I couldn't put it down. It had me hooked from almost the very start. But once is enough for me. I won't be rereading it anytime soon. But I wouldn't be surprised to read that others loved it. Or if it began receiving attention on best-of-lists, etc.

I don't know if this description will make sense to anyone or not...but this is a thunderstorm of a book. You know how some people love the sound of rain, wind, and thunder...and others not so much. It's just a very symbolically-stormy kind of book.

What an interesting review, Becky! I read Chris's review yesterday, and he totally sold me on the book...and actually I think your review just solidified my desire to get my hands on it.

I couldn't put it down either... but also had my moments of dislike! We may not always agree on every book we read (ahem...Looking for Alaska hehe), but we certainly agree on this one!

Since reading this one I've lent it out to two neighbors. We all agree it reminded us of Flowers in the Attic. I will always remember Madapple with fondness.

Thanks for the review. I hadn't heard of this book before, but I'm putting it on my ever-growing TBR list.

I had the same reaction to this book.. I read it, enjoyed it.. but know it's not one I will "reread someday"..