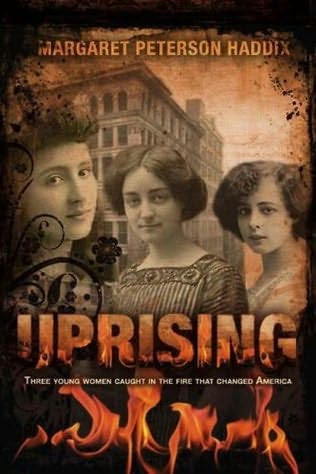 Tell me about the fire.

I honestly don't know what took me so long to get around to this one. Okay, that's a half-truth. It got put on the bottom in a box that got put on the bottom in a pile of boxes. That happens more frequently than I'd like. But they can't all be on the top on the top. The only reason you're seeing a review of this one at all is that I finally went to the library and checked it out.

Uprising is very straightforward. It makes no apologies for being what it is: a heartbreaking story of an all-too-true tragedy, the fire at the Triangle Shirtwaist Company. In the first chapter, we meet two survivors--a Mrs. Livingston--and a young woman named Harriet. Harriet had been just a girl--five to be exact--when the fire occurred. (And her presence at the factory that day was circumstantial--just happened to be there visiting her father, the owner of the company.) Now as a grown-up, or an almost grown up on any account, Harriet is on a quest to discover the truth about the past, her past, her father's past, his role in the tragedy.

It is a book that addresses many "issues"--women's rights--the suffrage movement included; the plight of the immigrant--the prejudices and discrimination not to mention the language barriers and the poverty; workers' rights--the need for unions to protect the rights of the employees from greedy and corrupt employers. The truth isn't pretty. To be an immigrant. To be a factory worker. To be living in the tenements. Not pretty at all. It was harsh and ugly and all-too-real for the characters we meet.

Our story is narrated by three girls--two of whom will meet an untimely end; we just don't know which two. Bella. Yetta. Jane.

"We did not know one another for long," Mrs. Livingston says. "We had so little time." This is both a lament and an accusation. After all these years, she still wants the story to end differently. Three girls meet, become friends, struggle, find happiness, and have their lives go on and on and on until they are three old ladies in rocking chairs. It just didn't happen that way. Mrs. Livingston stares off into the distance, off into the past, off into a time when she didn't know the fire was coming. "The story begins like so much else," she says slowly. "With hope. Hope and dreams and daring..." (4-5)

Each of the girls make for a compelling narrator--particularly Yetta and Bella. Bella is an Italian immigrant. Yetta is a Jewish immigrant--I am almost certain she's from Russia. When Bella first arrives in New York, she mistakenly learns Yiddish thinking that she's learning English. It takes some convincing too for her to realize her mistake! Two girls, two different natural languages, yet they share so much in common. Jane? Well, she's a rich society girl. How does Jane become mixed in with a bunch of poor immigrants who can barely speak English? I'll let you discover for yourself!

Richly detailed, this is a novel with haunting power. It is so good.

Other reviews: Abby, A Year of Reading, A Patchwork of Books and Sara's Holds Shelf, The Reading Zone, Teenreads.com,

I love Haddix. I'll have to look this one up when my TBR pile is under control.

I like this author too. I just finished her book Found. And my 12 year old nephew loves her other series that starts with Among the hidden.

This one is most certainly going on my wishlist, Becky!