What you should know about me:

*I've read Mansfield Park once. It was in the winter/spring of 2006. I was not blogging or taking notes on what I was reading. I didn't enjoy the novel much. I remember fairly early on in the novel trying to read the last few pages to figure out just what was going to happen to make me care.
*I watched Mansfield Park (2007) on PBS this past Sunday.
*I then decided to watch Mansfield Park (1999) on YouTube. I started it Sunday night and finished up yesterday.
*I am not a film critic. But I know what I like and don't like.

What you should know about Mansfield Park:

*Written by Jane Austen 1812-1814; Published in 1814.
* This was also the first of her novels which was not a revision of an earlier work. Elinor and Marianne was probably written in 1795 and finally revised and published as Sense and Sensibility in late 1811. First Impressions was written between 1796-97, and was finally published in 1813 as Pride and Prejudice. Mansfield Park, therefore, was conceived from its very beginning by a more mature Jane Austen than the previous two novels—written, as they were, first by the young Austen (~ 20 years old) and then the older Austen (~ 36). By the time Jane Austen began planning and writing Mansfield Park she had passed through her eligible years and, at 36, into confirmed spinsterhood.
*Mansfield Park is the most controversial and perhaps the least popular of Austen's major novels.
*Basic plot lines and character listings can be found here and here. And especially here.
*The main character, the heroine, is Fanny Price. 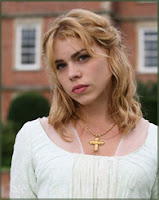 *Billie Piper's Fanny Price annoyed me. Greatly. Her blond hair and brown eyebrows irked me in a way that I would not typically admit to. Her hair was so un-Austen like. So un-Regency. So yuck, yuck, yuck in terms of being accurate to a period piece. 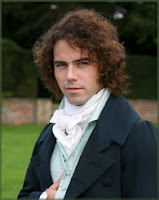 *I wasn't really pleased with the hair of a good many characters. Most notably why did almost all the guys have to have long, frizzy locks. Most especially Henry Crawford played by Joseph Beattie. Though Tom Bertram played by James D'arcy was not much better in terms of good hairstyles for guys if they want to appear attractive to the opposite sex. Note that I'm just talking hairstyles. Edmund's hair, on the other hand, was nice. I don't know if any of these would be historically accurate. I'm not a judge of such things when it comes to men.
*The book has roughly eighteen important/key characters that enter into the big plot lines. The movie narrowed it down to twelve. Of the thirteen they severely severed the importance of a good majority of those. Some characters only had two or three lines in the entire movie despite having played a good role in the book. For example, Miss Julia Bertram is of almost zero importance in the movie. Poor thing. Maria and Mr. Rushworth are also sadly lacking in importance to the movie. Though they have a little substance. 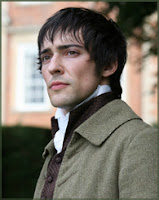 *None of the characters--almost none of the characters--have any depth, any heart, any soul. They're simply not characterized at all. It's not that Jane Austen wrote them as such. It's that they weren't given time, space, opportunity, and ahem LINES TO SPEAK that would make them be a character that was in any way human. Edmund and Fanny being the exceptions to the above observations.
*The movie moved too quickly. It forgot that for a movie to work, it has to make sense. Simple concept. I don't know how they forgot it. It's not enough that characters go through the motions and accomplish points one through three on their list. They have to show the WHY of it to make people care. Motivations. Intentions. Inner Thoughts. As it was, the movie was little more than a rushed choreographed dance with characters making hasty entrances and exits. Why should the audience care about the characters if there aren't any characters of substance to care about. Even villains need to be portrayed in such a way that their actions make sense.
*The camera work. Don't get me started. Maybe *some* people love the hopping up and down, can't-hold-a-camera-still, running and bumping along footage of which this movie primarily consists. But I'm not one of them. There was no need for Fanny to always be frantically racing and speeding all over the place whether inside or outside anyway.
*As far as the romance between Edmund and Fanny is concerned. It's thrown in as an afterthought in this movie. You don't really see it developing much if at all.

*I've read that this movie is hated by Austen purists. The reasoning I take it for some is that this "Fanny Price" is too enjoyable, too likable. Perhaps that's not phrasing it quite right. The book's characterization is such that most people find it hard to like Fanny Price. To care about Fanny Price. The movie doesn't resemble the book. Same names. But largely different personalities assigned to those characters. If you hate the book, you might find yourself charmed and loving this adaptation. The characters are fleshed out. The movie's pacing is excellent. There is much development. The character motivations of both the good and 'bad' characters are easily discerned. The movie makes sense. It is largely enjoyable. One reviewer said that as an adaption it wasn't much. It was too different from the book. But that same reviewer said that as a movie--just as a movie without comparing it to the book--that it was enjoyable and entertaining.
*I loved Frances O'Connor's Fanny Price. She was witty. She was smart. She was spirited. She just was really likable. The other characterizations--especially of Mary and Henry Crawford--are more believable. Henry was a villain through and through in the 2007 edition. There was nothing remotely tempting or charming or attractive about his bad boy status. In this edition, however, it is easy to forget for a moment or two--or for longer periods of time in some places--that this guy is the bad guy. Instead of knowing 99.99% that Henry Crawford is a bad guy, you feel more 70/30 or 60/40. There are moments where you doubt. There are moments where you briefly entertain the idea that maybe just maybe this guy has changed. This Henry Crawford is likable even in those moments where you're sure that he's not quite as good as he seems. Mary plays the villain well in both movies. But she's portrayed as more human, more vulnerable in this adaptation.
*There were more than a few places where I wish the 1999 movie had gone a little differently. It emphasized a point that I must have completely missed in the book altogether. Slavery. Supposedly the book and this movie draw from the fact that the Bertram's wealth comes from owning a plantation somewhere (Antigua??) with many many slaves. The movie is very in-your-face with the slavery. They make it a huge issue, a point of contention between Fanny and her uncle Thomas Bertram. There are also several weird scenes a) there are two places where the director (I think that's the person I mean) has interpreted Mary Crawford as ambiguously bisexual. There is a weird scene where Fanny is standing in during the play reading scene and reads quite flirtatious lines while held a bit too closely by Mary while Edmund watches on. And the second is a weird scene where Mary is helping Fanny get undressed after she's soaked by a walk in the rain. b) There is a scene where Fanny discovers Tom's journal/sketchbook which depicts drawings of slaves and/or others (both races) in quite sexual and somewhat perverse ways. Those uncomfortable bits last only a few minutes each and out of the entire movie may make up five to seven minutes. Maybe.
*While far from perfect, this movie was infinitely more entertaining and enjoyable to watch than the other.

I just watched the 2007 version as well and I had the same opinion. I have not read the book, so I was lost almost immediately as to what the movie was about.