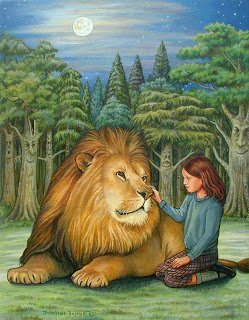 This past week, I've been revisiting Narnia. So far, I've read three of the seven novels by C.S. Lewis. I thought it would be fun for Poetry Friday, to do a Narnia tribute. Though I don't follow this recording artist much, her song "Aslan" caught my attention from the moment I heard it several years ago. It captures everything I love about the books. (Roundup this week is at Farm School.)

Don't stop your crying on my account
A frightening lion, no doubt
He's not safe, no he's not safe
Are you tempted now to run away?
The King above all Kings is coming down
But He won't say the words you wish that he would
Oh, he don't do the deeds you know that He could
He won't think the thoughts you think He should
But He is good, He is good

I know you're thirsty, the water is free
But I should warn you, it costs everything
Well, He's not fair, no He's not fair
When He fixes what's beyond repair
And graces everyone that don't deserve
No one knows Him whom eyes never seen
No, I don't know Him but He knows me
He knows me, He knows me

Lay down your layers, shed off your skin
But without His incision, you can't enter in
He cuts deep, yeah He cuts deep
When the risk is great and the talk is cheap
But never leaves a wounded one behind
He won't say the words you wish that he would
Oh, he don't do the deeds you know that He could
He won't think the thoughts you think He should
But He is good, He is good

And the second poem/song paying tribute to Narnia is "Turkish Delight" performed by the David Crowder Band. I love, love, love David Crowder. And this disco-inspired song, I must admit, is one of my favorites from the "inspired by" soundtrack. (Lyrics can be found here.)

What a great idea to have a tribute to these stories! I've never heard either of these. Thanks!

My kids will be delighted (!) with the Turkish Delight song. Thanks so much for sharing -- I'd never heard of either of these either.