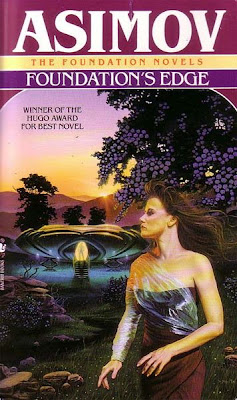 by Isaac Asimov was originally the fourth in the Foundation series. The third novel, Second Foundation, was published in 1953. (The two stories that the novel consists of were published in 1948 and 1949.) Foundation's Edge was published in 1982. Unlike the previous Foundation novels, the remaining books in the series--Foundation's Edge, Foundation and Earth, Prelude to Foundation, Forward the Foundation--were written AS novels. Does it make a difference? You bet! A great BIG difference as far as I'm concerned. Why? The novels seem sloppier, wordier, and sleep-inducing. Okay, maybe they won't really PUT you right to sleep. But in a word. Boring. No pizazz. No magic. Few WOW moments. And a whole lot of asides and tangents. Unless sociology, philosophy, science--all hypothetical studies of the three of course--lessons fascinate you and keep you turning pages, you'll find these novels lack the concise power of the original trilogy.

Foundation's Edge is the story of two men really. Golan Trevize and Janov Pelorat. Golan Trevize is a Councilman on Terminus. Janov Pelorat is a historian, a scholar, on Terminus. Trevize is exiled by the Mayor because he voiced doubts about the Seldon Plan. He voiced doubts about psychohistory. He voiced concern that the Second Foundation was still out there and still out to get them. Janov Pelorat is forced into exile as well. Not because he did anything wrong, but because Trevize is thought to need a companion, an excuse, a reason to make the journey. Pelorat's hopes and dreams revolve for a time around finding the OLDEST planet, the planet of origin, the place thought of as Earth. Trevize isn't concerned about Earth. He wants to try to find the Second Foundation--if it exists at all--and wants to destroy it. But the two are forced to live together, work together, travel together. They spend most of this book, and most of the next, together on a small spaceship. (A spaceship for 4.)

These characters aren't the only ones doing the narrating, however. There are plenty of minor roles. Plenty of plot twists. Some members of the Second Foundation contribute a large part to the story. But the heart of this one is the ongoing quest by Pelorat and Trevize. Trevize for one reason or another goes along with this search for Earth, and their search leads them somewhat indirectly to the planet Gaia. Oh how tired I am of hearing about Gaia.

For some reason or other--he chooses Gaia's concept of Galaxia. A concept that will turn the entire universe--the entire galaxy--into a super-organism. Every part of the universe--the planet, the air, the humans, the animals, the bacteria, the plants, the curtains, etc. into one collective consciousness. It is the loss of individualism. Every person, every animal, every insect, every blade of grass, every amoeba will be Galaxia. He's told that it will be a time-consuming process that will take several hundred years--probably five or six hundred years. So he chooses it with the thought that he can always unchoose it. But is that really true? 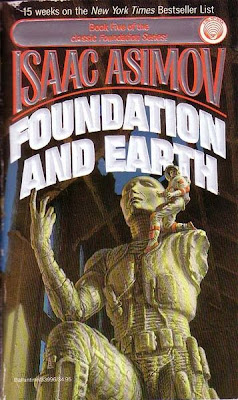 picks up right where Foundation's Edge ended. Essentially. But there is some inconsistency between Foundation's Edge and Second Foundation. I don't know how many readers notice this or how many readers care. I don't know if Asimov did this intentionally. But early in Foundation's Edge, one of the main characters, Janov Pelorat, is forced by the Mayor of Terminus into exile alongside Golan Trevize. They make a point of mentioning that Pelorat is leaving behind his wife. Not only is she just his wife--she's his pregnant wife. They refer to her only a handful of times, but apparently, by the end of the novel Pelorat has completely forgotten about his wife. Completely. Forgotten he was married. Forgotten that he was going to be a father. In the last chapter or so, he takes up with a new woman of sorts, Bliss, and for the rest of Foundation's Edge and all of Foundation and Earth not another word is spoken about Pelorat's poor, pregnant, abandoned wife back on Terminus. I believe at one point Bliss even asks if Pelorat is married and he says that he hasn't been married for years. A blatant lie on his part OR a forgetful Asimov at work.

Foundation and Earth is the story of Pelorat, Bliss, and Trevize. These three are out exploring the galaxy doing everything in their power to find Earth. Trevize is convinced that Earth holds all the answers, all the secrets of the universe. It's a quest he's willing to risk his life--and the lives of his friends--time after time after time. They visit a handful of planets. Each one scarier--either physically or psychologically--than the one that came before. Some are truly horrifying places. And of course at the MOST horrifying one of all they pick up a passenger. Travize doesn't want to. He fights it then and almost every chapter after that. But it does no good. No one will listen to him. The passenger is a young child. A child that they were told would be killed. But by saving this child, did they doom the universe?

I'm not going to have any more spoilers. These four and their quest to find Earth....and what they found and what they did....well, you'll just have to read for yourself.

These two had their brief moments of glory where the writing was good and the plot twists intriguing. However, for the most part, they lacked a lot in storytelling power. I think Asimov's problem with these novels is that sometime between 1953 and 1982, he decided, he determined that the world of Foundation had to be combined with the world he created in his Robot series. I haven't read the Robot series myself. But if these latter novels are any indication, I don't know that I want too. Perhaps, the earlier Robot novels are good. Perhaps not. Maybe fans of the Robot series were let down by these latter books too. Maybe they wish Foundation and Robots had not been combined. Who knows. I only know that Foundation's Edge and Foundation and Earth had way too many awkward conversations about humans and robots having sexual relationships.

Here is how the series is supposedly supposed to go these days.

You should still read "I Robot". It is a fabulous collection of Asimov's short stories. I have read and reread that collection a number of times, and it does not get old with the rereadings. The Robot novels (Robots of Dawn, etc) get old, but the short stories are great.

I am reading the book at the moment, and I cannot believe that you got confused Pelorat with Compor. Pelorat is an olderly historian who is sent along Trevize to find Earth. His wife is mentioned a few times, and he himself comments how they have fallen apart, and their (very much adult) son lives in another world as a professor etc. etc. Compor, on the other hand, is the traitor/friend of Trevize, who is sent as an agent of first foundation to follow trevize on his search for earth, and he is the one with a pregnant wife, and he is trying to go back to terminus to rejoin with his wife.

Trevize made the WRONG choice. really, gaia is not asking him to choose out of the three alternatives. Gaia is only asking him to provide approval for Gaia.

The reason is that, as we know from the next book, Gaia is actually the product of robots, which are still bound by the First Law of Robotics. To justify their takeover of the Galaxy, they need at least one human to give them a so-called approval. so they get trevize, who is known to make big decisions based on lousy evidence.

what trevize should have done was to realize was that Gaia itself was creating the terms of the decision, therefore the only thing he needed to do was to say NO to gaia. humanity would have then been free to go about its business in its usual flawed, fractious, but HUMAN way. that is the real problem underneath this novel.