The Margaret A. Edwards award is awarded each year to an author who makes a lasting contribution in the field of young adult literature. Instead of honoring one book, the award seeks to acknowledge a lifetime's worth of work.

For this challenge, I'm asking people to read 3-5 books by any of the award-winning authors. 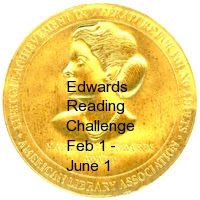 The time frame for this mini-challenge? February 1, 2008 - June 1, 2008.
Lists? Well, you can make a list of 'official' and 'alternate' books IF you want. Or you can just decide as you go. I know *many* people (myself included) have a hard time following lists even if we enjoy making them at the time. I also know many people rely on the library for their selections. And I *know* it is hard to predict just what will be on the shelves at your local library. So keep it simple.

I would encourage everyone to read The Giver by Lois Lowry if you haven't already done so. And of course, I'll be pushing folks to read Ender's Game by Orson Scott Card. (But it is by NO means a requirement for signing up.)
There are so many great authors on this list, and so many books. If you're like me, you've probably heard of quite a few of them, but never quite found the time to read some of these.

Edited to add: As far as authors go, I don't care if you want to read three (or five) different authors to add variety. Or three (or five) books by the same author. Split up your reading list however you want. (2 by Lowry, 1 by Peck, 1 by Card for example) In other words if you wanted to make this the "read 5 Judy Blume books" challenge, you have my okay.

Edited to also add: Overlapping with other challenges is fine. I don't have a problem with it. And for the record, you could also LISTEN to audio books if you would like.

Is overlapping with other challenges okay? I already have books by Lois Lowry and Madeleine L'Engle on my lists, and I'm always up for some more Ursula Le Guin..I'd just add Ender's Game and be ready to go!

Yes, overlapping is more than okay. It is encouraged :)

Oh yes, I am totally in! Great challenge, Becky! My list is here. I would have used The Giver, but I just started it yesterday.

Maybe this will help make up for me wimping out of the Jane Austen challenge :(

I'm in. And I haven't read any Orson Scott Card, so I may give him a shot.

I'm totally in. I have a list posted here:
http://boldblueadventure.blogspot.com/2008/01/margaret-edwards-reading-challenge.html

Great challenge. I've been looking for an excuse to read Orson Scott Card. Plus I started reading "Gathering Blue" one time at Borders and never managed to finish it.

I'm like you when it comes to making challenges. I'm hosting 5 and have 5 more ideas.

Welcome to the challenge, everyone! I'm so glad to see people signing up :)

I'd like to join. I'll post books on my blog as I read them. I'll choose books as I go...never sure what I'll feel like reading.

i've never heard of this award; i'm going to have to find out more about it! i had better play along with this challenge too! :)