Sword in the Storm 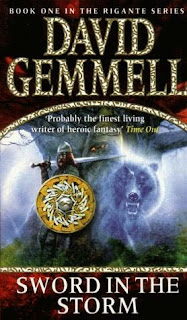 Sword in the Storm by David Gemmell is book one in the Rigante series. It's also one of the reasons I started the Cardathon. Let me explain. Yes, I started the Cardathon to introduce others to the glory-that-is Orson Scott Card. But it was also selfish. I wanted the chance to read some books that were Card-recommended. I would read Card's essays/articles about the books he was reading and be intrigued, curious. Card's thoughts on Gemmell intrigued me. Here is an author--Gemmell--that I've never heard of. And Card is praising him enthusiastically. You can read his review of David Gemmell's Rigante series here. I knew immediately that I would want to read some to experience it for myself--to see if it was really as good as Card claimed.

Sword in the Storm is 439 pages of pure pleasure. It's historical fantasy. But--and this is purely my take on it--it is fantasy that is done in such a way that it doesn't feel like fantasy. It feels real. The world is so well-crafted, so well-grounded. The characters so human, so life-like. It just feels real. Yes, there are some magical powers going on. (The Seidh) (Especially crucial is the Morrigan. Though I think the spelling may be altered in the novel.) But they feel real. They don't feel like make believe. It was a world, a time and place, that I thoroughly bought into.

The first book--the only book I've read so far--follows the life of a tribe--the Rigantes--based on the Celts of Britain. They never say the word "Britain." And the closest you get to "celt" is "Keltoi" but when you read it there is little doubt where it is set. Similarly, the threat--the people, the soldiers, of "Stone" are never called "Romans." But the reader knows who the soon-to-be enemies/conquerors are.

Never has a book been so rich, so fully immersed in culture WHILE at the same time being so full of action and intensity. The characters are well-developed. It doesn't matter if they're major or minor. All the characters have a life, a spark of their own. Each plays a role in the drama. Each is important. The whole community--the whole tribe--is given life. His characters are so human, so believable. They're full of flaws, but they're still--for the most part--so likable. You understand them. If they do good. If they do bad. You feel you know why. You understand why. The action? Intense. Whether plotting a romance or preparing for great battle scenes, the pacing is unbelievable. All of it is so good. It really keeps the pages turning.

I think I will take a hint from Card and not talk too much about the characters themselves. This is one you need to read for yourself.

I have actually said nothing about the characters themselves. For good reason: I don't want to mar them by trying to summarize who they are.

For Gemmell has done something that is rarely attempted outside the fantasy genre and rarely done well within it. He has created characters of nobility and honor, and has done it so well that instead of seeming larger than life, they never lose their humanity.

Anyway, I can't recommend this one highly enough!!!! Read this book!
Posted by Becky at 10:39 AM

Oh, yes. David Gemmel's Rigante series is wonderful. Do not miss his other books!

Excellent review Becky that is exacty how I found Gemmell's Rigante series of books. Each one was a real gem.

Gemmell has really fascinating way of twisting historical familiarities into a compelling story.

Great review Becky, this is exactly how I felt about Gemmells entire Rigante series.

Gemmell has a fascinating way of taking historical locations or events and wrapping them in to his fantasy worlds. Rarely are his characters over the top.

I would suggest his Wolf in the Shadow if you wanted another good read of his, that is a bit different.