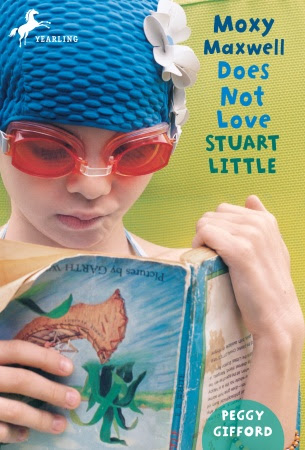 Can you tell us a little bit about your journey towards becoming a published author?

I am still surprised when I wake up and remember that I have published two children’s books. I have an MFA from The Iowa Writer’s Workshop and most of my published work until now has been in poetry. (I have also worked as a ghostwriter.)

What inspired you to write the Moxy Maxwell books?

I’d been working for hours every day on a play that I thought was going rather well; I was very focused and at the same time very open to ideas - any ideas apparently, because one afternoon when I was taking a break in the steam room, thinking about nothing in particular (except perhaps whether Julia Roberts or Meryl Streep should play the lead in my play) it occurred to me that it would be fun and funny to write a story about all of the things a girl does to avoid doing the things she’s supposed to be doing.

What (or who) is the inspiration behind the character of Moxy?

The character of Moxy is so familiar that I suspect there is something autobiographical about her.

Do you have a favorite scene from each book?

I have favorite sentences. In Moxy Maxwell Does Not Love Stuart Little, I like the sentence, “Moxy Maxwell had long thought her mother would benefit from a pair of aquamarine contacts.”

In Moxy Maxwell Does Not Love to Write Thank-You Notes, I like the sentence, “She was dreaming that she had to write thank-you notes to every citizen in the United States for their part in The War Effort.”

The lines are favorites because I don’t remember ‘thinking’ of them or writing them down. They seemed to have come from the story itself….

Does Moxy have a theme song by any chance?

Up until now Moxy did not have a theme song. But now, well now Moxy’s thinking about it.

What were your favorite books when you were Moxy’s age?

In third grade I loved the play, Cheaper by the Dozen, and the movie, Gentlemen Prefer Blondes, and Madeline L’Engles’, A Wrinkle in Time and Meet the Austins. I haven’t been able to find a copy of Meet the Austins in years - I would love to read it again. Also, there was a short-lived series a la Sue Barton, Student Nurse, which started with a book called, Peggy Finds the Theater and ended seven volumes later with Peggy Plays Paris - I was wild about them.

Moxy likes to read at night under the covers with a flashlight…did you/do you have a favorite time and place to read?

I read all of the time - even during the occasional tropical storm or small hurricane that happens sometimes when we are in South Carolina. I discarded the Itty-Bitty-Lights a few years ago when my husband gave me a pair of protective plastic safety-glasses with a little flashlight attached to each temple. They are more convenient because you don’t have to keep adjusting things as you turn the pages. When you were Moxy’s age, what did you want to be when you grew up?

I had BIG PLANS when I was Moxy’s age. Not vocational plans (except to be a rich and famous actress) but ideas of things I was going to write: in third grade I planned to write a novel called HUSH MARIAM about a man who goes off to fight in the Civil War but on the morning he is to march away, his wife (Miriam) can’t get a grip - she cries and cries until she becomes dehydrated leaving her husband with the dilemma of whether to leave her and go off to war or to stay home and save her life - presumably by making her drink lots of water. The story - which I conceived to be a novel - seemed something I would be better to able to handle when I had matured a bit and had, if nothing else, studied the Civil War in school. So I put off the actual writing of it until fifth grade but by then I had some even better ideas.

I probably didn’t plan on becoming a writer because I already thought I was one.

Can you tell us anything about your current work-in-progress? Do you have any upcoming releases?

MOXY MAXWELL DOES NOT LOVE TO PRACTICE THE PIANO BUT SHE DOES LOVE TO BE IN RECITALS will be out next fall.

I can’t remember who said, ‘Transcendence is absorption’ but it characterizes how I feel when I am working on a story once its template (or plot) has become clear to me.

The hardest part is working out the template (or plot).

I love getting feedback on drafts from a great editor. The writing goes from feeling like a solo event to feeling like collaboration. It is exhilarating - when someone (like an editor) ‘gets’ what you have been working on alone for many months: It’s fascinating to learn which elements of the story ‘work’ for them and which don’t.

Anne Schwartz, my editor at Schwartz&Wade (RH) has a habit of writing, HA! in the margin when something amuses her. The first thing I do when I get a draft back from her is scan it for HA!’s.

I read so much that I think I should start a service finding the perfect book for the perfect person at the perfect moment - a kind of Book Doctor. What I would do is create a profile based on their favorite books; taking into consideration their known reading obstacles e.g. trouble getting started/intimidated by foreign names/ and combine it with an assessment of their current mood and emotional needs and write a book Rx.

Do you have any favorites of the year?

I just finished The Worst Hard Time by Egan, It is THE BEST history of the Dustbowl and, in some ways, of the Great Depression itself that I have ever read. I chose it because things are socially and fiscally in such flux right now and I needed to get perspective. And perspective I got. The writing is accessible (he got the National Book Award) and the story itself is literally a true page-turner.

If you had twenty-four hours, a time machine, and a limitless supply of money, what would you want to do?

Could I trade some of the money for more of the time? Or is that what everyone says? I would interview great writers about their writing lives; their daily habits, their greatest obstacles, how they dealt with failure, which, of the books they wrote was their favorite etc.

I would start with Jane Austen.

© Becky Laney of Becky's Book Reviews
Posted by Becky at 9:07 AM

Thanks Becky for the interview. I loved the novel idea of the dehydrated crying Civil War wife. It made me laugh out loud.

And I think we ought to start a "Book Prescription" business. Compete with those librarians that give away book prescriptions for free!