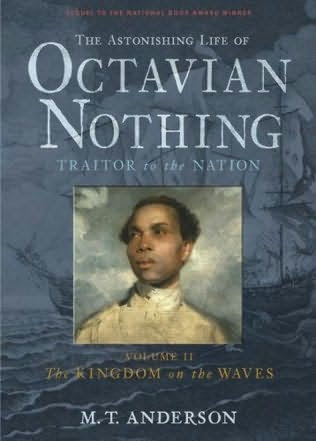 Anderson, M.T. 2008. The Astonishing Life of Octavian Nothing: Traitor to the Nation: Volume 2: The Kingdom On The Waves.

I'm at a loss of words. I almost think this would take a second reading to cement just how I feel about the second volume of Octavian Nothing. I'll start by saying that I loved the two page summary of the first volume. (Is it wrong to admit that it made me smile?) It perfectly sums up the action and motivations of the first volume. The second volume begins right where the other left off. We've got Dr. Trefusis and Octavian on the run. They're lives are at stake, and they're seeking refuge in Boston--a city which at the moment is under British control. (Call them Tories, Loyalists, Redcoats, whatever.) Both know that Boston is a dangerous city. A city that could fall into Rebel hands. And if and when it does, they know that their lives would be forfeit. There hope is to obtain a place within the British army--on a British vessel or ship. Octavian at last is able to join fellow runaway slaves and enlist in Lord Dunmore's army. He has promised to free the slaves of Rebels if they will join his cause and fight.

Here is the scene where he enlists:

"Your name?" said the Serjeant. "Octavian," said I. "Your surname?" I considered. I would no longer be called Gitney. "I have none," I said. "And ye don't have no master." "I have no master, sir," said I, "except the King." To the tatooed Craigie he said, "Write 'Octavian Negro.'" "While I would not trouble the Serjeant, I would beg--" "What then?" "If it please you, sir, put down nothing for the surname. I would rather be called nothing than be named only for my race." Serjeant Clippinger gave an insalubrious smile. "Octavian Nothing?" said he. I regarded my name. Knowing not who I was, it seemed a fair enough appellation. "Octavian Nothing," I agreed. And thus it was inscribed. (129-130)

Army life is hard. And war isn't all Octavian thought it would be. He is keeping a journal of his life, the events as they unfold. (1775-1776) Along the way, he makes new friends and rediscovers old friends. Pro Bono is back wearing the new name of William Williams. The book is a continuation of his quest for freedom, liberty, and identity.

The book is well-written. And the pacing (or action) is much steadier and more intense than the previous volume. Old characters--Dr. Trefusis, Mr. Gitney, Pro Bono, etc--are there alongside new ones: Slant, Will, John, Pomp, etc. There is much depth--heart and spirit--to the two books. There is much to admire and appreciate within the pages. When you think of it as a coming-of-age story it is quite impressively done. Both books showcase humanity--the good, the bad, the ugly, the abominable, the admirable.

Labels: "A" authors, "A" Titles, 2008, Candlewick, slavery, war, YA Fiction, YA Historical Fiction

This series sounds so good and I've read so much about it! I really need to pick up the first book and get cracking on it!

Chris--You should definitely make a point of reading these. I'd love to have the first book be a book group choice for the google group.

Becky, do you need to read the first one to understand what's going on or does the little summary give you enough info?