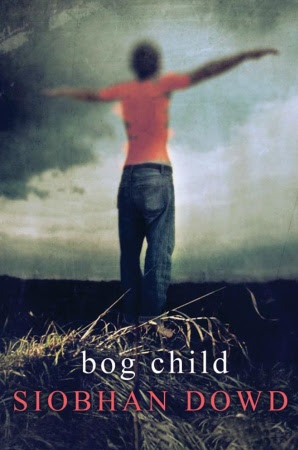 Don't hate me. But I didn't love Bog Child. I stuck with it because I'm stubborn, not because it was going "good" for me. I found it confusing and a bit on the boring side. Abby has a generally positive take on the novel, but admits that, "This book is not for everyone, but those who can stick with it through the unfamiliar Irish slang and dialog will find a touching, dramatic story of family and sacrifice. Siobhan Dowd's writing is poetic and she builds tension throughout the book. This is an unforgettable story set during a time rife with passion and turmoil."

The novel has received four stars in the review journals. (Kirkus, School Library Journal, Booklist, Publishers Weekly). And those reviewers obviously saw much too praise. It also made Amazon Editors Top 10 List for teen lit. And Publisher's Weekly's Best of 2008 list. I'm sure it will be making many other "best lists" and might even merit an award or honor. [The Printz is notorious at times for choosing books that I wouldn't choose in a million years. Not all the time. Just some years.]

What is it about? A young man, Fergus, on the verge of adulthood discovers half-a-body. The body of a seeming child. (Minus the legs. Plus an ancient-looking bangle). The archaeologists who come to collect the body--and study it--feel it might date from the Iron Age. First century A.D. (What I suppose you'd call C.E. now in these days of political correctness.) The novel is set in Ireland in 1981.

The book is a complex-and-tedious weaving of two or three story lines. Fergus has a brother in prison on a hunger strike. To "help" his brother out, he agrees to smuggle packages across the border at some risk to himself. He doesn't know what he's carrying. He doesn't want to know either. But he fears that it might be materials used in making bombs. During the course of a few months, Fergus begins having dreams about "Mel" the body they discovered. Fergus also falls for a girl, Cora, and has a timid courtship that isn't quite fully explored.

The book offers little in explanations. It presumes that every reader--no matter the age--will have enough background on the troubles haunting Ireland. Their conflicts with the British. In particular the terrorist actions of certain groups within Ireland. I was clueless. I'd imagine many readers would be clueless. And Siobhan Dowd could have easily given just a few brief paragraphs to orientate American readers with what was going on. True, the author is dead. But the publisher might have foreseen that readers might have trouble jumping in on this one.

For a book as complex as this one to work for the reader, you have to care. Care about the characters. Care about the action. Care about something. Obviously Dowd got many readers--at least the ones with review columns--to care and some deeply so. But not this reader.

To read a somewhat spoilerish but thorough review read the Guardian's thoughts on the novel.
Teenreads.com


© Becky Laney of Becky's Book Reviews
Posted by Becky at 8:42 AM

This sounds like one of those that reviewers love but that teens won't touch with a 10 foot pole.

I agree that it would have been really nice to have a little primer on Northern Ireland and the Troubles. I was totally confused at first and I had to put the book down and do some research before I was ready to tackle it again. But I will admit that since seeing the movie Some Mother's Son when I was a teenager, I've always been a little fascinated with hunger strikes, which might explain why I was willing to stick with the book. And I'll tell you that the story has still stuck with me even weeks after reading it.

I adored this book :) Just finished it today. I really don't agree with you- I'm a fourteen year old Scottish girl with very little prior knowledge of the Troubles and I got into this so quickly. The way that Mel's story is interwoven into the rest of the plot is so clever- it makes you really want to read on. A lot of my friends have read it also and enjoyed it- my copy was borrowed from my best friend. It was really interesting and I finished it in a day :D Each to their own and all, but I'd recommend it to anybody.