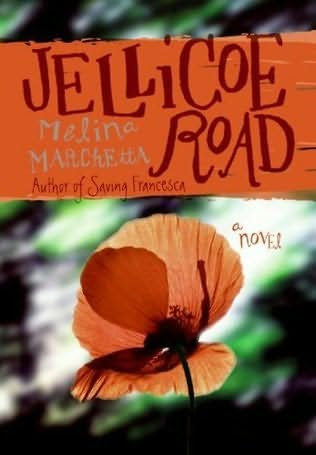 My father took one hundred and thirty-two minutes to die. I counted. It happened on the Jellicoe Road. The prettiest road I'd ever seen, where trees made breezy canopies like a tunnel to Shangri-la. We were going to the ocean, hundreds of miles away, because I wanted to see the ocean and my father said that it was about time the four of us made that journey. I remember asking, "What's the difference between a trip and a journey?" and my father said, "Narnie, my love, when we get there, you'll understand," and that was the last thing he ever said.
We heard her almost straightaway. In the other car, wedged into ours so deep that you couldn't tell where one began and the other ended. She told us her name was Tate and then she squeezed through the glass and the steel and climbed over her own dead--just to be with Webb and me; to give us her hand so we could clutch it with all our might. And then a kid called Fitz came riding by on a stolen bike and saved our lives. Someone asked us later, "Didn't you wonder why no one came across you sooner?" Did I wonder? When you see your parents zipped up in black body bags on the Jellicoe Road like they're some kind of garbage, don't you know? Wonder dies.

Powerful, isn't it? I won't lie...Jellicoe Road is a difficult read in many different ways. But worth it? Yes! Resoundingly yes! Why is it difficult? It weaves two stories together. The stories are seemingly unconnected...at least in the beginning. And because you--the reader--don't know what is going on...it's easy to get frustrated. Easy to get confused. We've got the past--from which the prologue serves as an introduction--and the present. (In a way it reminds me of Tamar.)

The present. We've got several teens whose lives intersect--Taylor Markham, Ben Cassidy, Jonah Griggs, Chaz Santangelo, Raffaela, Jessa McKenzie--of whom Taylor is the main character. Taylor doesn't know where she fits in, "One day when I was eleven, my mother drove me out here and while I was in the toilets at the 7-Eleven on the Jellicoe Road, she drove off and left me there. It becomes one of those defining moments in your life, when your mother does that. It's not as if I don't forgive her, because I do" (20). Taylor is one of many students at Jellicoe School, a boarding school; she's the leader of her dorm or "house". (There are six houses.) And the school tradition is that there are "wars" between three sects--those that live at the boarding school (led by Taylor), the Townies (led by Chaz Santangelo), and the Cadets (led by Jonah Griggs). These wars involve territories. And these games last six weeks or so. And they're a big deal for those involved. But what at first seems like a senseless, pointless book on children playing war--tactical strategies, trapping, pranking, and such--soon turns into an emotional journey of the heart, soul, and mind.

Taylor Markham is concerned, worried, anxious about Hannah, a woman who is the closest thing she has to family, when she disappears without a word. One day she's there, the next day she's gone. And Taylor can't get a straight word out of any of the adults around at the school or in the town about Hannah's whereabouts. Taylor--though Hannah is still missing--likes to take refuge in Hannah's house. She loves to read Hannah's manuscript, for example, which is the story of five kids who live on Jellicoe Road: Tate, Narnie, Webb, Fitz, and Jude.

I don't want to spoil this one in any way. But I think this *may* help readers out a bit. I didn't catch on that the italicized portions--the stories of Tate, Webb, Narnie, Jude, Fitz, etc.--were written down stories. That Taylor was reading something Hannah had written down. I'm still not sure all of them are meant to be. But I think some of them are. And it is these stories which help Taylor to piece everything all together. (I had assumed that they were flashbacks. That they were there for the reader's benefit, but not for the characters within the book.)

This is a book that had to grow on me. It wasn't one that I knew I would love--or thought I would love--from the very first page. But by the time the story comes together, by the finale, it had me completely won over. The story is intricately told and well written. Haunting, yes. Bittersweet, definitely. But one that I think is worth reading and recommending.

© Becky Laney of Becky's Book Reviews
Posted by Becky at 9:00 AM

Thank you so much for reviewing Jellicoe!! The more people who know about it, the better. It's my number one hope for the 08 YA Cybil.

I just did this lovely, lovely interview with Melina. I ask the same set of questions all the time, but her answers are perhaps my favorite.

Have you read Saving Francesca?

Yes, I have read (and LOVED) Saving Francesca! Your interview was great, by the way!

Fabulous. I love Melina Marchetta's books. On the Jellicoe Road is my fav.

Wow!! that is a wonderful read. I would love to read the book. My friend introduced me to this blog, she is a great fan of it and now I know the reason.