Travel the World: Canada: Getting The Girl 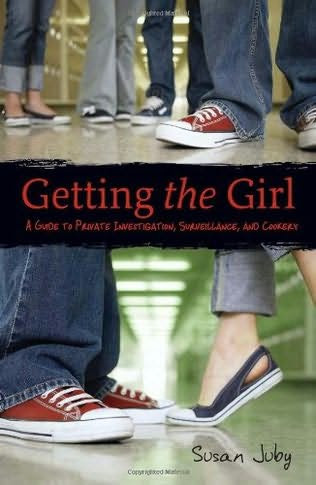 Getting The Girl is about as subtle as a skunk. That's not to say it stinks. It's just that the topic of this one--social hierarchies, school bullies, self-esteem--is in your face and a bit over the top. I'm not even saying that the book is unrealistic or unbelievable. I think kids--rather you want to call them tweens or teens--can be cruel. This cruelty can manifest itself in several ways--either the cool iciness of making people invisible OR in the more direct confrontational style--using words and physical actions. Or in this day and age--online bullying through social network sites and blogs. And I think situations like the ones in the book could exist in that extreme.

You don't want to get D-listed. Trust me. That's the fear of all teen girls attending Harewood Technical School. Sherman Mack is a boy-on-a-mission. A ninth grader who is out to save his crush from getting D-Listed by the Defilers. Once you're "D-Listed" or "Defiled" no one--no matter how cool or uncool will talk to you. You essentially vanish from the hierarchy altogether. Not even teachers want to acknowledge those unfortunate students.

Sherman Mack is a wanna-be detective. He's read a few detective stories--mainly borrowed from his good friend, Vanessa--and he's watched more than his fair share of cop shows like the three Law & Orders. When his crush, Dini, begins dating Lester, Sherman is more than flustered. He fears that she'll be D-Listed. Lester's previous girlfriend, Farrah, was D-Listed last year. Vanessa thinks it's a good idea--at least at the first--but she thinks his motivations are all wrong. He should be investigating this cruel caste system--identifying the nameless Defilers--for the sake of all girls, not just one in particular.

So he begins his investigation.

Sherman is more than a little dorky. More than a little awkward. Yet his quirky voice works most of the time. To be honest, I spent half the time thinking that the book was clever and funny in just the right amounts. But the other half thinking that it was just too much--too silly, too unrealistic. While I can admire much of the book, I felt that it was uneven in times. Sherman I loved. But his friends weren't as developed as they might have been. Particularly Rick. Something about him just felt flat to me. I did enjoy the secondary story line, however, Sherman's interest in cooking. At first, I felt it didn't quite belong. I couldn't quite see the connection, but the ending made it work for me and tied it all together.

© Becky Laney of Becky's Book Reviews
Posted by Becky at 9:16 AM

I reviewed this book on Worducopia. I agree with your assessment--it's half funny and clever, and half over-the-top. Which didn't especially appeal to me, but might be perfect for certain tweens.