How To Build A House 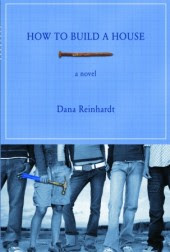 The third time isn't the charm. (Her first two novels are: A Brief Chapter In My Impossible Life and Harmless.) It may just be time for me to dissent from public opinion and admit that Dana Reinhardt's books just aren't to my liking. It might be easier on both of us. Especially since her books are generally received well. Her first book especially seemed to be buzz-worthy.

I can almost guarantee you will enjoy this one much much more than I did. (I know I'm in the minority in disliking it.) You might even love it. The premise is relatively simple, a teen girl, Harper, goes away for the summer to join a team of other teens. Their project is to build a house for a family whose home was destroyed in a tornado. The themes are love and friendship. It's easily categorized as a coming-of-age story. A story of how this young woman heals herself and becomes older and wiser because she's learned some life-lessons and had some self-realizations. It's a story of a broken woman beginning the journey towards becoming whole. Why does she need healing? Her family is "broken." Her father and stepmother are divorcing. Her stepsister, Tess, is barely speaking to her any more. Her friends-with-benefits, Gabriel, is treating her horribly.

What didn't I like about the novel? The narrator Harper. She's smug. She's condescending. She's a bit stupid. Maybe stupid isn't the best word. She's a bit unwise at times when it comes to acting, thinking, and speaking. She is polar opposite to everything I like. She doesn't believe in wearing jeans--she "can't" wear them. She hates country music*. She's an atheist. Well. Mostly. She's a nonbeliever that is obsessed with listening to Christian rock music** so she can make fun of it. She loves to mock their enthusiasm and passion. She doesn't appreciate it on a musical or spiritual level. And that's not the only thing she mocks. I am not sure if it is the narrator or the author--but something felt very condescending and smug about how the South was treated. But perhaps more annoying than even the mocking of Christianity is her obsession with lecturing every single person she meets with her environmental save-the-world-humans-are-evil spiel.

Did I like nothing about the novel? I did like a few of the characters. In particular, I liked Teddy. I don't know what he saw in Harper. But Teddy himself I liked.

*Now it's not like I *only* love country music. I love many many different types of music. But there are country music phases in my life. In high school particularly I lived for country music--Tim McGraw, George Strait, Garth Brooks, Clay Walker, John Michael Montgomery, Brooks & Dunn, etc.
**I will be the first to admit that a few groups are dinky. And sometimes it feels like the dinky ones are the ones that get the air time. But I seriously doubt if this author listened to actual Christian rock music. If she had, she wouldn't have found much to mock. I have rarely listened to Christian radio. But I'm well-schooled in Christian music because I buy CDs. Have been listening Christian music at least twenty-five years. If she'd called it "gospel" or "Southern gospel" or "praise & worship" or "contemporary" I could understand where she's coming from a bit better. But Christian rock? Methinks she's clueless.

© Becky Laney of Becky's Book Reviews
Posted by Becky at 9:26 AM

Nothing wrong with not liking a book! I'm glad you gave examples why, since that gives readers a better idea of whether they might like/dislike it. Nicely done!

I have heard one of my friends literally gush about this book for months now. I still haven't read it. Everytime I pick it up to start, I find something else I want to read more. Your review has piqued my curiosity, though...I am interested in hearing other views.