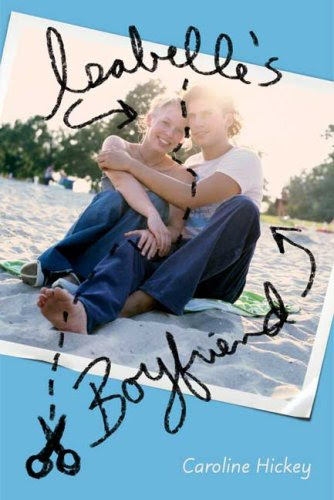 I loved the jacket description: "This is the story of how I met the guy of my dreams and became friends with his perfect girlfriend just so I could steal him. Along the way, I lost my best friend, realized my mother was a human being, stopped letting my dog boss me around, and embarrassed myself more than once. If you want to know all the gory details, read on. Just do me a favor--don't show this to Isabelle."

What I liked about this one? It doesn't end happily. I better explain. I feel it's a good thing Taryn doesn't get what she wants. Because what she wants wouldn't be good for her.

Taryn, our heroine, has a messy life with messy problems. She wants a better life, a more perfect life. She wants to have "the dream" which for almost any teen girl would include having a boyfriend and being a part of the popular crowd.

Taryn gets caught up in everything so quickly. She sees a cute guy, John Epplin or "Epp". She talks with him a few minutes. She walks away with the notion that he's her DREAM guy, a guy who's made just for her. She convinces herself that it is destiny and fate that led to this meeting. Even though she so knows that he has a girlfriend. Yes, he smiled at her. Yes, there was eye contact. But he mentioned his girlfriend. This story only becomes more convoluted when she discusses him with her best friend, Lila. Suddenly, this plan comes to form. She must go after this guy, chase him, must do what she can to steal him, to win him. After this point, the embarrassment increases chapter by chapter. She's not a nice person. She becomes someone who it is almost impossible to like or respect. She drops her best friend, Lila, begins to use her new friends, Isabelle and Pete, and generally speaking makes a fool out of herself. I especially thought the way she treated Pete and Lila was awful.

Here we see a girl in love with the idea of love. We see love at its most naive.

Another thing I liked about the novel was that it explored how love--the seeking and obtaining of boys--can interfere in friendships. How boys can come between friends. How having a boyfriend can "ruin" friendships when you become obsessed, or when you just become too busy to spend time with your other friends. How easily you can hurt your friends by moving on or ignoring them.

Taryn is immature in my opinion. I'd be curious to see what others have to say on this one. But she felt a bit too immature to be fifteen. She's a naive fifteen let's say. Of course, I'm no expert on what is "normal" for fifteen. So she could be completely authentic. I just don't know.

I do think there are girls like Taryn out there--fifteen or any other age.

I thought the book was great coming from a twelve year old. The only thing I wish she would have changed was the ending, it would have been nice to see Taryn and Pete together sharing a relationship. That's the only thing that ruined the book. It also ruins it when it's your book project and you have to write notes on the book. But if you like that you should read " Fake Boyfriend " it's about friends who try to get there friend Isabella over a guy she's been off and on dating, so they set up a myspace and make a fake boyfriend. It was so interesting I read it in two days, way better than Isabella's Boyfriend. But i'm only twelve, so it might or might not interest you. - Tara